Data from an all-Wales survey has shown that only about half of patients at high risk of vascular events take prophylactic aspirin. The Quality and Outcomes Framework (QOF)mig ht be a policy mechanism to achieve the vigorous promotion of the drug for this indication in Wales. In this paper, cautious estimates suggest that NHS hospital cost savings arising from vascular events avoided in Wales might be used to fund the introduction of an indicator into the QOF for four points. The suggested indicator that Welsh health service policy makers may introduce in 2007–08, possibly into the medicines management section of the QOF, might be: ‘All patients at increased risk of heart attack and ischaemic stroke not taking low-dose aspirin are encouraged to do so unless contraindications exist’

Only about half of patients at high risk of vascular events take prophylactic aspirin in Wales. The Quality and Outcomes Framework (QOF)might be used as a policy mechanism to improve prescribing rates for aspirin in high risk patients in Wales.

NHS hospital cost savings arising from vascular events avoided in Wales might be used to fund the introduction of an indicator into the QOF for 4 points.

Aspirin is an inexpensive and easily available medicine that is widely used to treat a number of conditions.[1] In low doses (75–150mg per day)it is used to reduce the risk of major vascular events such as heart attack and ischaemic stroke. Recent studies have also provided evidence that aspirin is cost-effective for this indication. [2,3] Despite the clinical and economic evidence, however, data from an all-Wales survey has shown that only about half of patients at high risk of vascular events take prophylactic aspirin.[4]

The General Medical Services (GMS)con tract allows the 22 local health boards (LHBs)in Wales to commission primary care services for their local populations. An integral part of the contract is the Quality Outcome Framework (QOF)w hich is a financial incentive payment system using a maximum of 1050 points to measure achievement (see Box 1).[5] In the following analyses, the possibility of using the QOF as a policy mechanism to achieve increased aspirin prophylaxis in high-risk patients is examined. The analyses consider cost savings, but an economic evaluation was not undertaken since the focus of the paper is on policy development. 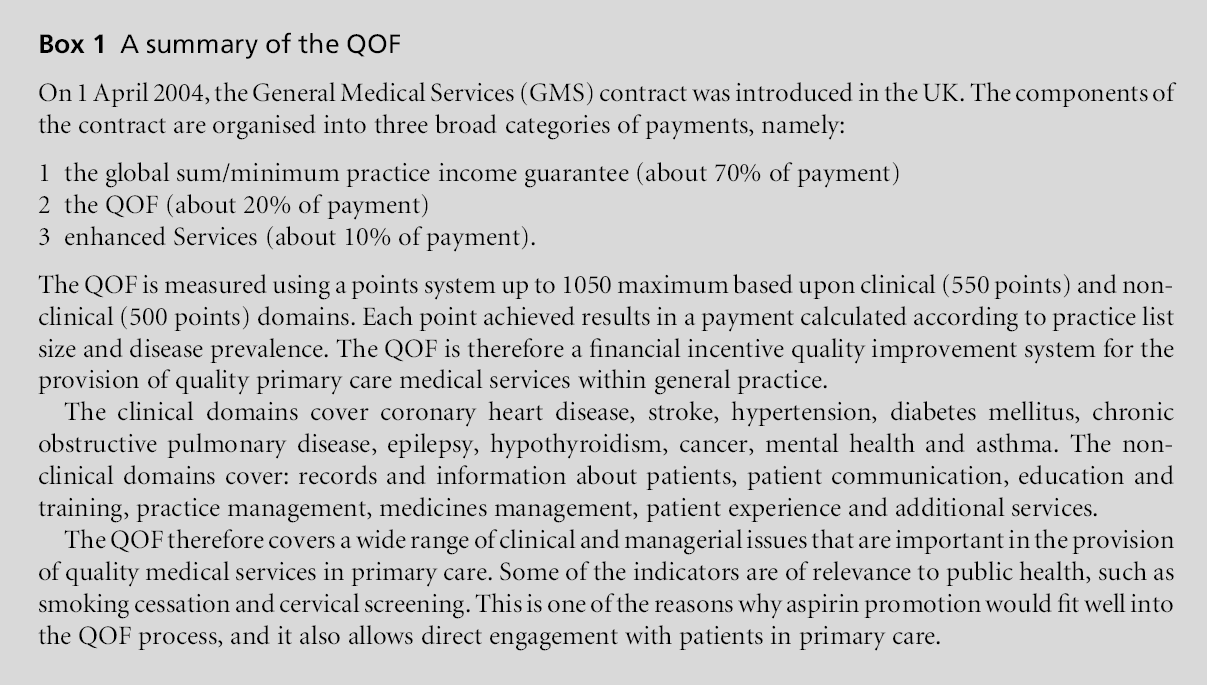 A healthcare system was modelled in Wales based upon average population sizes for general medical practices (5500 patients)and the average cost of a QOF point (£120).[6] For the Welsh population of approximately 2.9 million people, there would be about 530 average general medical practices across the 22 LHB areas. Data on costs and outcomes have been estimated using published literature, including specific analyses from Wales. Table 1 presents a summary of the calculation formula used. 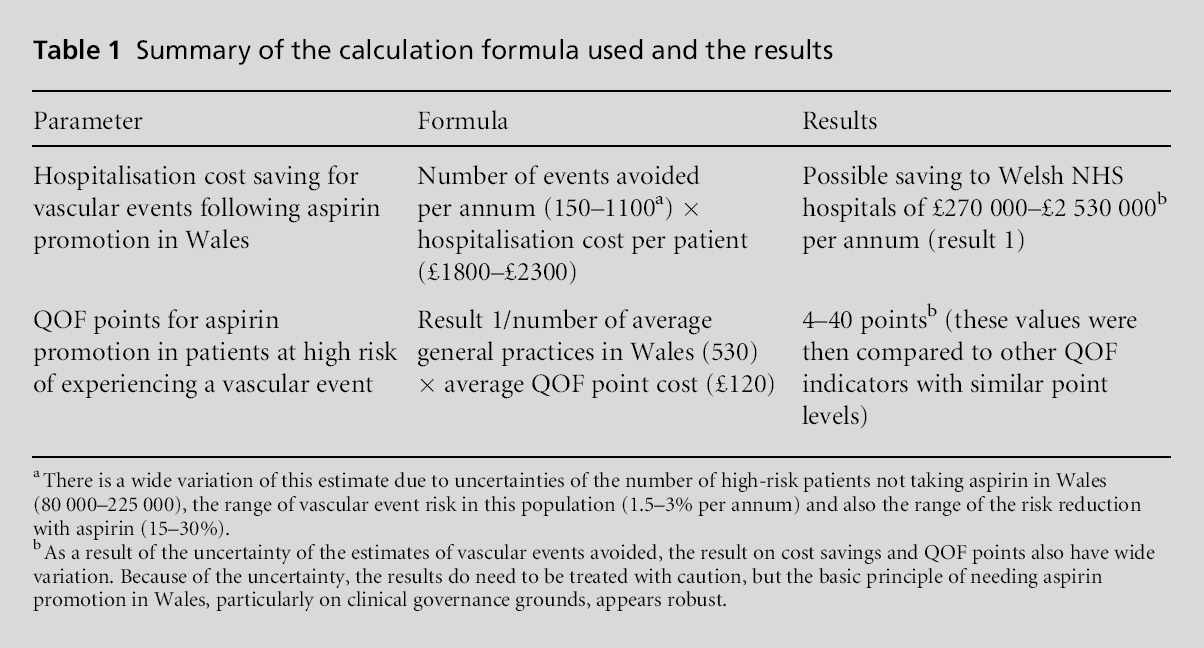 Events avoided multiplied by the hospitalisation cost per patient gave an estimate of annual cost savings to Welsh NHS hospitals that might be achieved following the vigorous promotion of aspirin. The QOF points that might be awarded for aspirin promotion were then calculated by dividing the cost saving by 530 (number of average general medical practices in Wales)and £120 (average QOF point cost). Indicators on the current QOF list with similar point levels were then identified for comparison purposes, so that reasonable policy recommendations might be suggested.

Table 1 presents a summary of the results. If 150–1100 hospitalisations were avoided by the vigorous promotion of aspirin in Wales, then the cost saving to NHS hospitals could be £270 000–£2 530 000 per annum. Taking the lowest cost saving estimate of hospital admissions avoided, then approximately four QOF points could be afforded for all average practices across Wales, to encourage all eligible highrisk patients not taking aspirin to do so. With the highest estimate, approximately 40 QOF points could be afforded.

For comparison purposes, indicators of four points include ‘repeat medication’, namely the clinical reason for the drug can be identified in the patient records. Another example is that the practice will meet the prescribing advisor at least annually, and agree up to three actions related to prescribing, and subsequently evidence the change.

With the highest estimate, this can be broadly compared to clinical performance on three disease areas, namely epilepsy (16 points), cancer (12 points) and hypothyroidism (8 points), or 10 medicines management indicators (42 points). For clinical performance, the work is substantive and involves having effective patient care systems in place such as accurate disease registers. For medicines management, the actions required are also substantive to ensure safe and effective prescribing.

The finding that aspirin use in patients at high risk of vascular events requires vigorous promotion in Wales was first published at the Welsh Aspirin Group conference in 2004 titled The Public Health Potential of Aspirin in Wales.10 It now seems important to put in place a formal policy to address this issue.

The QOF might be an effective method to achieve promotion of aspirin prophylaxis to high-risk patients in primary care. The QOF requires the maintenance of disease registers for patients at high risk of vascular events, along with medication reviews. Identifying patients eligible for encouragement to take aspirin, unless contraindicated, therefore appears relatively straightforward. The work required to do this does not seem comparable to that required on either the three disease areas or the ten medicines management indicators. A cautious initial starting point for an aspirin promotion indicator might therefore be four points, which would break even at the lowest cost saving estimate. A suggested indicator that health service policy makers might consider introducing into the QOF in 2007/08 for 4 points is:

All patients at increased risk of heart attack and ischaemic stroke who are not taking low-dose aspirin are encouraged to do so unless contraindications exist.

This indicator might possibly be introduced into the medicines management part of the QOF in Wales, and Box 2 summarises the arguments for this. The suggested introduction could result in substantial gains to patients and significant cost savings to the Welsh NHS. In addition, significant savings to community rehabilitation and social care services as well as employers might also be anticipated in Wales. 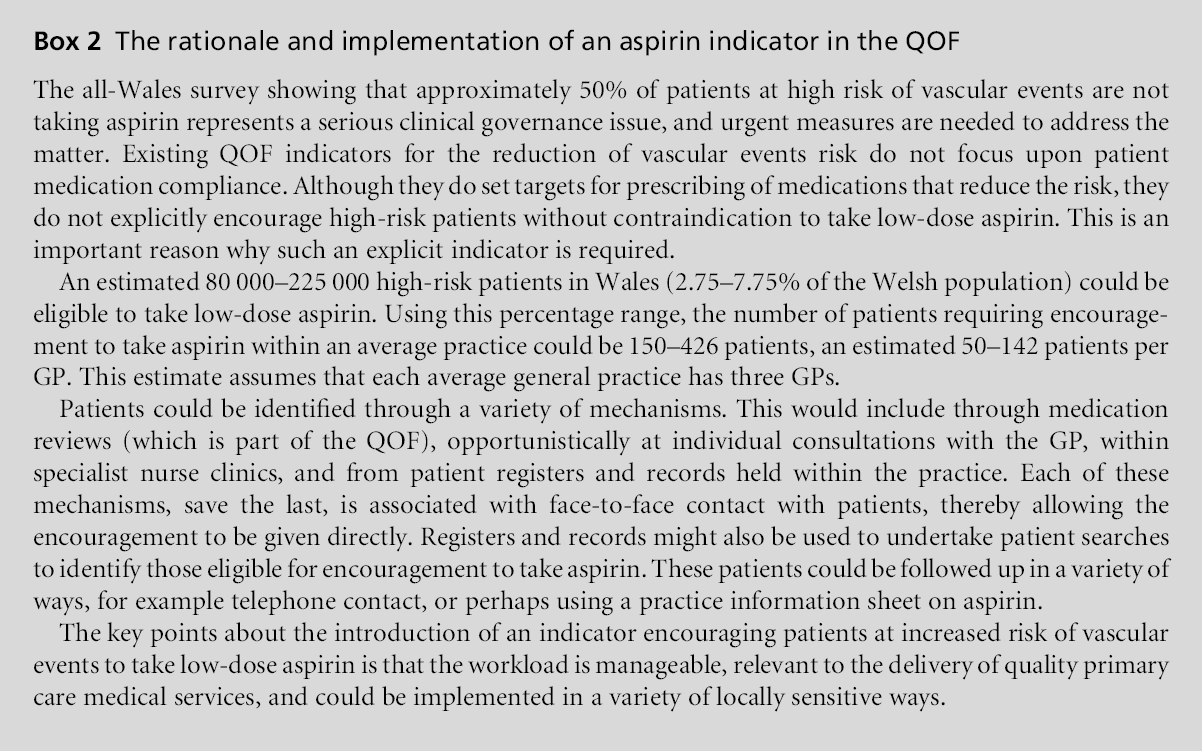 The Welsh situation might not be applicable elsewhere. For other countries in the UK, the introduction of an aspirin promotion indicator into theQOFwould need to be based on evidence of need, so up-to-date surveys of aspirin use in high-risk patientswould seem an appropriate first step.