To meet future challenges, knowledge about practice characteristics associated with the spectrum of examination and treatment offered in general practice is important for organisational planning.

The demand for primary care services has increased in developed countries due to ageing populations, rising patient expectations and reforms that shift care from hospitals to the community. At the same time, there is a shortage of general practitioners (GPs) in many countries and regions. Studies suggest that for many purposes appropriately trained nurses can provide certain types of care equally as well as doctors.[1–3] The expectation is that substitution of doctors by nurses for specific examination, treatment and control procedures can reduce physician workload.[4,5] Whether time-consuming procedures are performed by GPs or staff members within the practice or the patients are referred to specialists may, however, be influenced by economic and personal as well as structural factors.[6,7] The literature is sparse but knowledge about contributory conditions is very important for organisational planning and implementation of strategies meeting future challenges.

The prevalence of asthma and allergic disorders in the population is high and patients with such symptoms frequently attend general practice for symptom control, diagnostics and prevention. These procedures are, however, offered in some but not all GP surgeries. In Denmark, allergy vaccine therapy (allergen immunotherapy) has previously been a task for an allergy specialist, but is increasingly performed within general practice. Both GPs and staff members under direct supervision may perform this kind of therapy. It is a well-known procedure with rare but serious adverse effects, i.e. anaphylactic shock. Based on several cases of anaphylactic shock caused by specific immunotherapy for grass pollen the Danish National Board of Health in 2004 sent instructions about emergency preparedness in relation to allergy vaccine to all GPs.[8] Lack of adherence to this guideline may have serious consequences,[9] but compliance has not been evaluated.

The aim of this paper is therefore: 1) to analyse physician and practice characteristics associated with examination and treatment offers to patients with allergic diseases in general practice, and 2) to evaluate guideline compliance with respect to anaphylaxis emergency treatment kits.

By the end of 2005, 1391 of 3616 GPs randomly selected from the membership list of the Danish Medical Association were invited to complete the questionnaire survey, Prevention for patients with asthma and allergy in general practice. The four-page questionnaire was sent by mail. One reminder was mailed after two weeks. The questionnaire was developed by trained researchers from Audit Project Odense10 and the National Board of Health. A pilot test among 15 GPs resulted in minor amendments to the questionnaire.

The physicians were asked about their practice: number of physicians (single-handed if only one specialised GP), number of staff members, education of staff, number of patients listed, surgery facilities, anaphylaxis emergency kits available and examination and treatment procedures offered within the practice. For each of 15 listed procedures they were asked if these were performed in the surgery and by whom (themselves, other GPs and/or practice staff). They furthermore responded to questions on whether they had adrenaline, a ventilation bag, oxygen, suction, and/or a treatment protocol for anaphylaxis emergency, and if the kit items were easily accessible in one place or not. Questions about continuing medical education and working relationships with other specialties were included too, but are not reported on here. The four-page questionnaire included 18 items. Approval from the local ethics committee was not required.

Performance rates were defined as the proportion of physicians where the different examination and treatment procedures were carried out in their surgery. By definition ‘performed in their surgery’ could be by themselves, physician colleagues or staff members. Due to local agreement among GPs in the centre of Copenhagen most of their laboratory tests were performed in an affiliated laboratory but classified as ‘in the surgery’. For comparison, performance rates were estimated for different groups of doctors.

The extent of regional shortage of GPs was classified as high in seven out of 16 counties (Storstrøms, Vestsjællands, Sønderjyllands, Ribe, Viborg, Ringkøbing and Nordyllands counties).

The unit of analysis was the single participant, i.e. the individual GP. Owing to anonymity, data from GPs working in the same practice were not linked. Confidence intervals were estimated at a 95% level. Stata 9.0 was used for all analyses.

In total, 895 (64.3%) participants completed the questionnaire and were included in the study. Female physicians constituted 36.6% (34% of all GPs) and the mean age was 52.2 years. Single-handed doctors were slightly underrepresented among the participants (30% compared to 40%).

Beyond nurses the staff members included medical secretaries, auxiliary nurses, laboratory technicians and a few others. Some 61% of the GPs had a nurse within the team (n=847), and 89% had a separate room where staffmembers could carry out consultations on their own (n=888). Absence of a consultation room was more common among single-handed physicians compared with GPs working in group practices (19% versus 8%, n=888). Of the 5% without clinical staff (44/891), half were single-handed.

Referral to other specialties versus examination and treatment within general practice

Table 1 shows the proportion of physicians where specific examination and treatment methods were offered in the surgery (performance rates), and the proportion having a member of staff performing them. If services were not offered in the surgery, it was assumed that patients were referred to other specialties. The extent to which the different procedures were offered varied from a performance rate in practice of 42% (skin prick test) to 99% (peak flow). Staff members performed between 19% (application technique) and60% (spirometry) of the procedures (Table 1). Analysing the association between performance rates and practice/physician characteristics we observed that single-handed GPs and those without a nurse in the team reported lower performance rates of allergy vaccine therapy, peak flow monitoring, spirometry, spirometry with 2-stimulation and exhaustive running tests (Table 2). Physician’s age was negatively associated with peak flow monitoring, spirometry and spirometry with 2-stimulation. Skin prick testingwas more widespread among GPs with a nurse on the team, and those working in geographical areas characterised by no shortage of physicians. More than a fifth of physicians did not use clinical staff to perform any of the specified procedures (22.3%, n=895). In practices carrying out the procedures, members of staff were more frequently involved if the staff included a nurse, the physician was young or the physician was a partner in a group practice (data not shown). The largest difference was observed if the team included a nurse (a more than twofold difference).

Allergy vaccine therapy was performed in the surgery among two-thirds of the physicians (Table 1). They were generally well prepared to treat anaphylactic shock with adrenaline and ventilation, but around one third did not have oxygen and suction (Table 3). 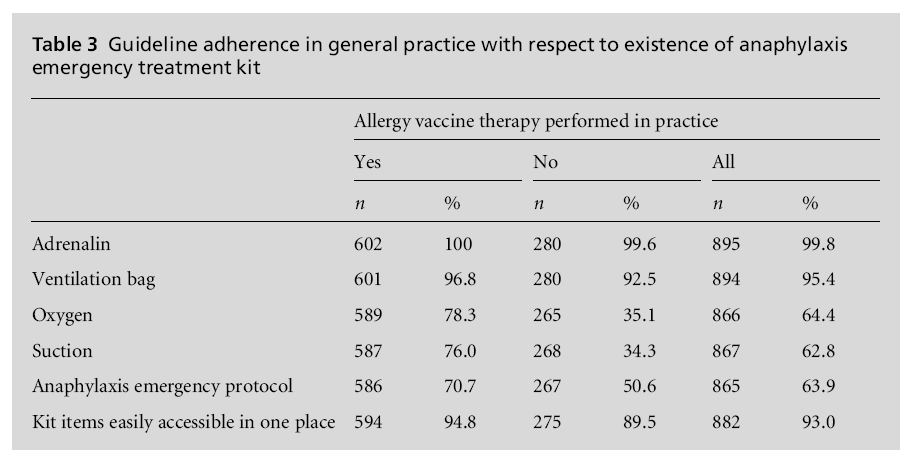 A variety of diagnostic and treatment procedures for patients with allergic diseases are offered in general practice. There is, however, a large variation in referrals to other specialists and in the involvement of staff. The extent of offers and the degree of involvement of staff is strongly associated with having a nurse on the practice team. Guideline recommendations for preparedness to manage anaphylactic shock in connection with allergy vaccine therapy are not fully implemented.

In Denmark, GPs are organised in small clinics varying in size from single-handed practices consisting of only one GP to larger units with two to three or up to eight GPs. Staffs may consist of secretaries, nurses and laboratory technicians; few physicians have no staff at all. Most services are free of charge, including all examination procedures. Also free of charge are services performed by other specialists followingmedical referral from GPs. It is mandatory to have a medical referral in order to see an allergy specialist. GPs are paid a basic fee per patient listed and specified fee-forservice remuneration. The skin prick tests are paid for separately in some but not all counties, which may explain some of the variation observed in performance rates.

We invited a large number of GPs randomly selected from all Danish GPs to complete the questionnaire. We achieved a high participation rate. GPs with a particular interest in allergic diseases may be overrepresented, but the participants were representative of all GPs with respect to age and gender. Single-handed GPs were slightly underrepresented. Our study was not designed to explore the quality of examination and treatment procedures performed in the general practices nor the reasons why staff were involved or not. We do not know to what extent it was the GP or the staff who carried out the specific procedures in the clinic. We suggest that the observed proportions of GPs who allowed staff to perform the procedures were maximum estimates. In conclusion, the results are representative and give insight into the organisation of allergy intervention offers in general practice and associated structural and personal factors.

The guidelines produced for GPs on how to be prepared for and treat anaphylactic shock have not had their full effect.[8] Ambulances generally have a short response time and are equipped with remedies for anaphylaxis. The number of ambulances equipped with a specialist doctor is increasing, while small emergency rooms across the country are being closed. The importance of having access to oxygen and suction should, therefore, not be neglected. It is internationally accepted that adrenaline is the most important treatment and the drug of first choice when an anaphylactic event occurs.[11,12]

The increasing workload among GPs in Denmark and other countries makes this study very topical. Our study only includes procedures in relation to patients with allergic diseases. Cautiously, however, we suggest that having a nurse on the practice team is crucial for the involvement of non-physicians in other clinical areas too.[3,13] One solution for general practices in the future would be to shift some of the care from the physicians to the staff. Studies have shown that nurses obtain as much positive feedback from patients as do doctors, and in some cases even more.[2,14] Precautions must, however, be taken to prevent staff creating additional needs among the patients or simply repeating some of the work performed by the GPs.[1,4] This can be done by sufficient in-service training of the staff and a clear division of the different tasks.[15] As this study showed, cramped surgery facilities can be a crucial barrier to reorganisation and a further increase in general practices’ participation in the diagnosis and treatment of patients with allergic diseases.

This study shows that general practice is substantially involved in examination and treatment of patients with allergic diseases. However, there seems to be room for further involvement of staff and implementation of procedures in practices which do not undertake these procedures or refer the patients to other specialists. It is, however, crucial that different organisational models are evaluated with respect to quality, job satisfaction, patient satisfaction and safety. Qualitative studies may provide further knowledge on variation among practices and especially why the nurses made a difference.

We thank all GPs for their participation in the study, Lise Stark of the Research Unit of General Practice in Odense for proofreading the manuscript and Jette Blands of the National Board of Health, Copenhagen for advice on the study design.

The Danish National Board of Health, Copenhagen, funded the survey and salary for DGH.