Venous thromboembolism and wound infection are serious complications of lower limb arthroplasty. The incidence of these complications in Scotland ranges between 1% and 2%, with considerable regional variation. The Scottish Intercollegiate Guidelines Network (SIGN) was set up to develop evidence-based clinical guidelines for the NHS in Scotland. A questionnaire survey of orthopaedic consultants in Scotland was carried out to audit the regional preferences in both antibiotic and thromboembolic prophylaxis and to compare their conformity with the SIGN guidelines and published literature. The study revealed that despite SIGN guidelines and overwhelming clinical evidence, there is no consensus between orthopaedic surgeons in choice of prophylaxis. The majority of the respondents used a three-dose antibiotic regime (66.6%)and low molecular weight heparin for thromboprophylaxis (46.6%). Only 22.7% preferred a combinationof aspirin alongwith mechanicalcompression. The current practice is not supported by published guidelines or available clinical evidence, nor is it cost-effective. Further efforts are required to develop an acceptable national protocol

Venous thromboembolism and wound site infection are two devastating but preventable complications of joint replacement surgery. In Scotland the Scottish Intercollegiate Guidelines Network (SIGN) has published guidelines, on both antibiotic and thromboembolic prophylaxis to encourage evidence-based medical practice.[1,2] Although the guidelines have been widely distributed within the NHS in Scotland, it is not clear to what extent they have been implemented. Guidelines can achieve better treatment outcomes for patients, but local ownership of the implementation process is crucial to success in changing practice. About 8000 primary arthroplasties are performed annually in Scotland. The average infection rate is between 1% and 2%, deep venous thrombosis (DVT) rate between 1% and 1.5% and rate of pulmonary embolism (PE) 1%. There is considerable variation in complication trends by region.[3]

We present the results of a survey of consultant orthopaedic surgeons in Scotland to audit the differences between antibiotic and thromboembolic prophylaxis protocols between hospitals, and to compare their conformity with both SIGN guidelines and other published literature. Attempts have also been made to analyse the cost-effectiveness of each type of intervention.

A standardised questionnaire was mailed to 123 consultant orthopaedic surgeons in Scotland to be completed and returned, anonymously, to the first author. Surgeons from 22 hospitals were included in the survey (see Box 1). Consultant names were obtained from the Scottish Orthopaedic Society mailing list. Each hospital was then individually contacted by telephone to confirm the names of consultants in their orthopaedic department, before mailing the survey questionnaire. Surgeons not performing lower limb arthroplasty were excluded. Details regarding number of antibiotic doses, type of pharmacological or mechanical thromboprophylaxis used, either alone or in combination, were determined. Cost analysis was done using data from the British National Formulary.[4] Box 1: Hospitals included in the survey

The response rate to the survey was 64% (79 out of 123). Four responses were excluded from further analysis, as they were incomplete. Altogether, 66.6% (50) of the respondents preferred a three-dose antibiotic regime, 26.6% (20) used single-dose, and the remaining 6.6% (5) used two doses (given once preoperatively and again post-operatively). The majority of respondents (66.6%) used one pharmacological agent along with one mechanical means as part of their thromboprophylaxis regime; 12% used only pharmacological agents and 9.3% only used mechanical means. Detailed analyses of the results are given in Tables 1 and 2. 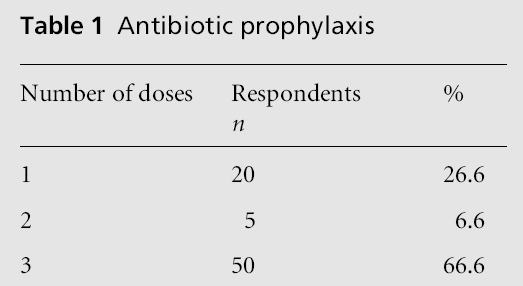 Only 26.6%of the respondents favoured a single-dose antibiotic regime as recommended by SIGN 45.2

There is considerable evidence that the administration of additional doses post-operatively does not provide any additional prophylactic benefit.[5,6] A randomised multicentric study of 2651 hip arthroplasties by Wymenga et al found no difference in wound infection between either one or three doses of cefuroxime prophylaxis.[6] There is no clinical evidence to support the use of additional doses by the remaining 73.4% of respondents.

The cost of a 750 mg vial of cefuroxime (Zinacef, GSK) is £2.52; allowing for other costs, such as drug preparation, administration and wastage, an average cost of £5.00 is a reasonable estimation per dose (hidden cost).[4] This translates into a considerable wastage of resources and manpower with no palpable clinical benefit. Antibiotic prophylaxis is an adjunct, not a substitute for good surgical practice. It can only be one component of an effective policy for the control of hospital acquired infection (HAI).

Thromboembolic prophylaxis after joint replacement surgery represents a benefit–risk analysis. In as much as fatal PE is rare in this context, it is important to minimise the morbidity of the prophylaxis.[7] SIGN 62 supports the use of both pharmacological (aspirin, low molecular weight heparin (LMWH), unfractionated heparin (UFH), warfarin) and mechanical (graduated elastic compression stocking (GECS) ± intermittent pneumatic compression (IPC), foot pumps) means, either alone or in combination.1 No clear recommendation is given as to which is the best form of prophylaxis in the current context.

In a meta-analysis of randomised trials, aspirin reduced the risk of asymptomatic DVT and PE by about one-third in patients undergoing elective orthopaedic surgery.[8] Aspirin may be more effective in the reduction of proximal DVT than warfarin.9 Compared to heparin, aspirin causes a decrease in non-PE deaths and as a result, shows a tendency to decrease the overall death rate.[10,11] There is also evidence from large trials unrelated to joint replacement, that aspirin prevents non-PE deaths.[10,11] Although the efficacy of LMWH and warfarin is excellent, the bleeding complications associated with these anticoagulants are not inconsequential. The incidence of major bleeding complications is reported to be between 1.5% and 4%.[12,13] Both Salvati et al and Sarmiento et al have recommended the use of aspirin for thromboprophylaxis as it has an excellent safety profile and is comparatively inexpensive and effective.[7,14] There is no excessive risk of bleeding, haematoma formation or infection.[1,8] The additional benefit if any, of UFH orLMWHcompared to routine early mobilisation, aspirin and mechanical prophylaxis is unclear.[1,15] In orthopaedic surgery there is a high risk of recurrent asymptomatic DVT, [4–5] weeks post-operatively.[16] In this situation, Aspirin or mechanical prophylaxis are more effective than heparin as they can be readily continued for 35 days after surgery. LMWH therapy continued for [4–5] weeks after surgery is more effective than conventional therapy for 7–15 days, but has logistical problems and high costs.[1,16] Adoption of fractionated heparin as the standard form of prophylaxis after joint replacement does not appear to be justified at this time.[7] The use of GECS in hip or knee replacements is based on weak scientific and clinical evidence. A prospective randomised controlled trial in 177 patients by Hui et al, showed no advantage of above or below knee GECS in the prevention ofDVT.17Multiple studies have documented the safety and efficacy of IPC after joint arthroplasty.[18–20] Various authors have studied the role of pulsatile pneumatic plantar compressions (foot pumps) in DVT prophylaxis. [18–20] Both Doppler ultrasound and venography have been used to prove their effectiveness. A major cause of concern with this form of treatment has been lack of patient compliance.

Aspirin (tablets, 20 cost £0.16) is significantly cheaper than LMWH (enoxaparin – Clexane, Rhone-Poulenc Rorer, 40 mg costs £4.52) even without taking into consideration the costs of administration. A pair of GECS (Thrombexin, Climax-Medi Bayreuth) costs on average, £2.00, depending on size. The foot pumps (Orthofix, Vascular Novamedix, Hampshire) are expensive at £2000, but are reusable and cost-effective over a period of time.

The need for thromboprophylaxis in joint replacements is uncertain for three reasons. Firstly, there is good evidence that chemical thromboprophylaxis reduces the venographic prevalence ofDVTbut there is little to suggest that this results in a reduction of symptomatic incidence. This information is essential for a balanced judgement on prophylaxis, particularly since chemical prophylaxis may carry a risk of side-effects. Secondly, the duration of increased risk is unknown, but this information is needed to determine the duration of prophylaxis. Thirdly, randomised clinical trials normally include all patients and cannot show whether prophylaxis should be universal or selective. The incidence of venous thromboembolism is higher in those with risk factors, but those without obvious clinical risk factors also developed symptomatic thromboembolism. Therefore selective prophylaxis is inappropriate. The aim should be a universal prophylaxis by a clinically effective, cost-effective and safe method.[21]

Clinical practice guidelines are designed to help practitioners assimilate, evaluate and implement the ever-increasing amount of evidence and opinion on best current practice. Where there is evidence of variation in practice which affects patient outcomes, and a strong research base providing evidence of effective practice, guidelines can assist healthcare professionals in making decisions about appropriate patient care.[22] Implementation of evidence-based guidelines is the responsibility of each NHS trust, and is an essential part of clinical governance. Although it may be impossible to adopt every guideline immediately on publication, mechanisms should be in place to ensure that care provided is reviewed against the recommendations and the reasons for any differences assessed and,where appropriate, addressed. These discussions should involve both clinical staff and management. Local arrangements can then be made to implement the national guideline in individual units, and to monitor compliance. This may be done in a variety of ways including continuing education, training and clinical audit.[23] The highest standards of patient care and improved outcomes are the ultimate goal.

Although the response rate to this survey was only 64%, it still reflects the wide variability in clinical practice in Scotland. There is a possibility of response bias to the questionnaires, with some consultants not following the guidelines choosing not to reply. The effect of this on the overall results is felt to be minimal, as the majority of respondents were found not to be following the guidelines.

There is considerable variation in practice among consultants, with no consensus on the best form of prophylaxis following arthroplasty. This may account for the regional variations in complication rates. There is no clinical evidence to support the practice of a three-dose antibiotic regime, and it is a waste of scarce resources.[2,5,6] The routine use of LMWH is not supported by available evidence nor is it cost effective.[7] There is no firm evidence to justify the use of GECS.[17] A combination of aspirin with IPC or foot pumps appears to be the prophylaxis of choice with the maximum safety profile, cost-effectiveness and clinically proven efficacy.[14,18] Extended prophylaxis with aspirin poses the least logistical problems. The survey suggests that current practice may not be the most effective practice, and further efforts are required to develop a nationally acceptable prophylactic protocol based on current guidelines and available clinical evidence.