Colorectal cancer screening: a retrospective study of compliance with guidelines in a university-based primary care practice

Aim Colorectal cancer is the third most common cancer in the US. Randomised trials have demonstrated the efficacy of screening. Our goal was to determine the compliance among primary care physicians with the American Cancer Society screening guidelines for colorectal cancer and secondarily to determine the reasons for non-compliance.Methods Two-hundred and twenty-one medical records were randomly selected for this retrospective cohort review. The  identification of records was determined by inclusion criterion: (1) all patients born 1950 or before irrespective of co-morbidities;(2) first visit to the clinic in 2000; (3) most recent visit after December 2003, so as to exclude patients who dropped out of the practice or died. The records were examined to answer the following: (1) was screening offered when it was indicated? A 2-year period to complete screening was permitted; (2) was screening completed by any of the approved methods either on time or late? (3) Were abnormal/normal results followed-up according to the guidelines? We allowed a 2-year follow up period. If the answer to any of the above was ‘no’, non-compliance was recorded and possible reasons for non-compliance were searched in the medical record.Results Altogether, 55.6% of the patients were offered screening when it was indicated; 66.5% completed screening either late or on time; abnormal or normal results were followed according to guidelines in 59.2%; and 33.0% had documented compliance. The most common explanation for non-adherence was ‘unknown’, i.e. the medical record did not provide an explanation (79%),19.6% declined any screening and 1.4% were noncompliant because of lack of insurance or the presence of co-morbid conditions.Conclusions The compliance rate in this internal medicine practice was 33.0%. The reasons for noncompliance for the most part remain unknown, but there was substantial patient refusal to be screened,suggesting room for improvement either in patientor physician education, or in documenting recommendations and results.

Colorectal cancer (CRC) is the third most common cancer in both men and women, and is the second most common cause of cancer-related deaths in the US.1 The American Cancer Society (ACS) has estimated that in 2006 there will be 148 610 new cases and 55 170 deaths in the US.1 The natural history of CRC provides an opportunity for the prevention or early detection of cancer as the progression from adenoma to carcinoma occurs over the course of several years.2,3 The survival rate for localised disease is 90%, compared to less than 10% for metastatic disease.4,5 Thus, CRC screening is one of the most efficacious cancer screening programmes available today. When discovered early, CRC has very good outcomes. The five-year survival rate for persons diagnosed with stage I disease is over 90%.6,7 Randomised trials have demonstrated the efficacy of screening. Faecal occult blood tests (FOBT) reduce mortality by over 30%.8 Allowing the removal of precancerous polyps, endoscopic screening decreases CRC incidence by 75–90%.9 Therefore, increased screening would result in significant mortality and morbidity benefits, especially for those at increased risk of developing CRC. Despite this, CRC screening rates throughout the country remain dismally low, lagging far behind those of all other cancer screening tests.10,11

Current screening guidelines are stratified by risk level by the ACS. Recommendations for those with no risk factors other than age (average risk) are at age 50 years to begin screening via (1) annual FOBT; (2) flexible sigmoidoscopy every 5 years; (3) annual FOBT plus flexible sigmoidoscopy every 5 years; (4) double contrast barium enema every 5 years; (5) colonoscopy every 10 years. Individuals are at increased risk if they have a family history of CRC or adenomas diagnosed in a first-degree relative (FDR) younger than age 60 years, two or more FDRs diagnosed with CRC at any age, or a personal history of CRC, adenomas or inflammatory bowel disease (IBD). Such individuals should have an examination of their entire colon, preferably with colonoscopy, starting at age 40 or 10 years earlier than the age at diagnosis of the youngest affected relative, whichever is earlier.12

Despite the evidence supporting the effectiveness of screening, clear-cut screening guidelines and widespread availability of screening tests, the proportion of the US population aged 50 years or older that has been screened remains low (less than 50%).13–16 Compliance on the other hand, defined as adherence to the screening guidelines, has never been reported in the US. Explaining the concept of compliance further, e.g. it is necessary to get FOBT every year, but it is even more important to follow an abnormal result with colonoscopy, or that one flexible sigmoidoscopy qualifies for CRC screening but unless it is repeated every 5 years it does not meet the definition of adherence. Moreover, the sources of underutilisation of CRC screening tests are unclear. It has been proved that in individuals with access to health care, a recommendation made by a primary care physician (PCP) is an important facilitator of screening use.17,18 With this background, we planned a retrospective study with a primary objective to determine the compliance among primary care physicians with the ACS guidelines for CRC screening. A secondary objective was to identify the reasons for non-compliance as documented in the patient record, and to determine whether differences in compliance exist based on sex and ethnicity.

This retrospective study was carried out at an internal medicine/primary care practice of eight full-time boardcertified internists at the University of Connecticut Health Center at Farmington, CT, USA. This is an academic centre, suburban in location, with the average patient population belonging to the middle to upper socio-economic class. The physicians personally took care of these patients and there was no involvement of medical students or resident physicians.

We randomly selected 221 medical records (110 females and 111 males) for review. This selection of the records was based on the inclusion criteria below:

3 the most recent visit after December 2003, so as to exclude patients who dropped out of the practice or died.

Thus patients selected were age 55 years or older and had been followed up in the clinic for at least 5 years and last seen within the previous 2 years.

The selected records were then examined to answer the following questions.

1 Was screening offered when it was indicated?

We know that screening should begin at age 50 years for average-risk patients and earlier for those at increased risk due to presence of inflammatory bowel disease, family history of polyps or CRC, personal history of polyps, or a family history of hereditary colorectal cancer syndromes. Thus, based on the risk categories as outlined by the ACS, we decided the time for screening for every patient and then reviewed the chart to find at what age screening was discussed or offered to the patient.Weallowed a two-year period to complete screening. Moreover, if the patient turned 50 years before the guidelines were in force, we decided the on-time screening to be 1997 unless previously done.

2 Was screening completed by any of the approved methods either on time or late?

3 Were abnormal or normal results followed-up according to the ACS guidelines?

According to the guidelines, flexible sigmoidoscopy should be followed by a full colonoscopy if any polyps are identified during the sigmoid colon evaluation. Additionally, it needs to be repeated every 5 years irrespective of the findings. Guidelines clearly elucidate the follow-up screening strategies based on the initial results or findings. Such a follow-up was considered necessary to qualify for compliance with the guidelines. We allowed a 2-year period to complete the follow-up.

If the answer to any of the above questions was ‘no’, or if the screening was completed late, non-compliance was recorded and the medical record was thoroughly searched for the reasons for non-compliance. Moreover, the basic demographic data of each subject pertaining to sex and ethnicity categorised as white and non-white (Hispanic, African-American and Asian) was recorded as well. 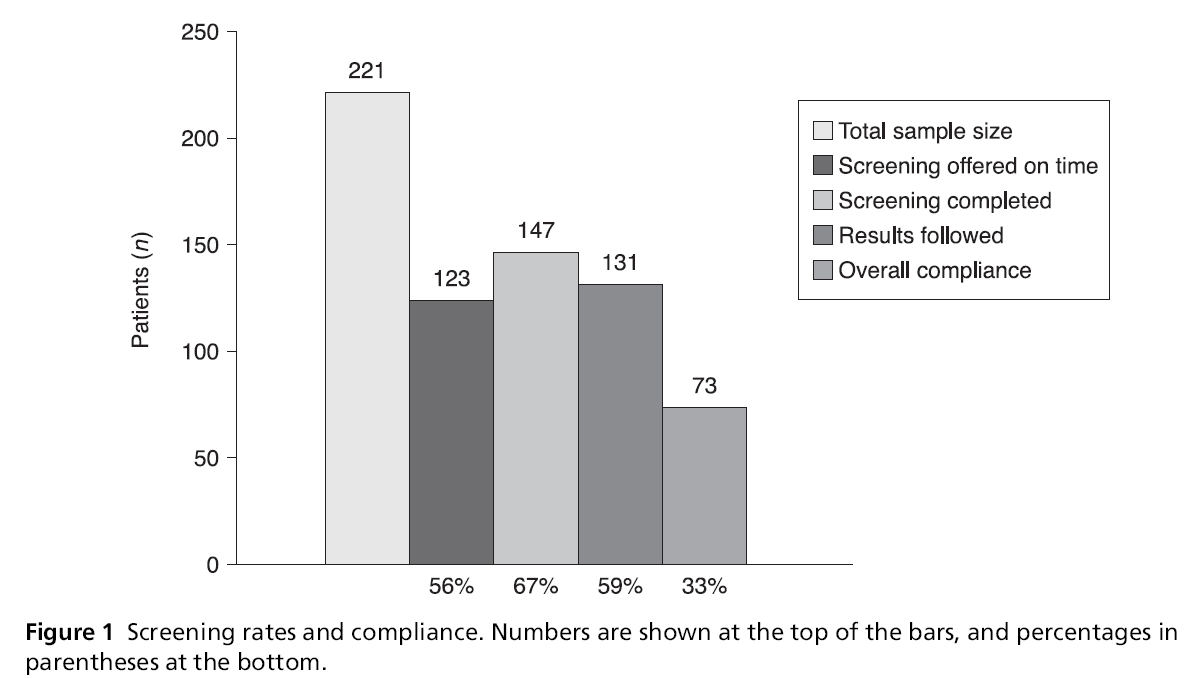 Figure 1: Screening rates and compliance. Numbers are shown at the top of the bars, and percentages in parentheses at the bottom. 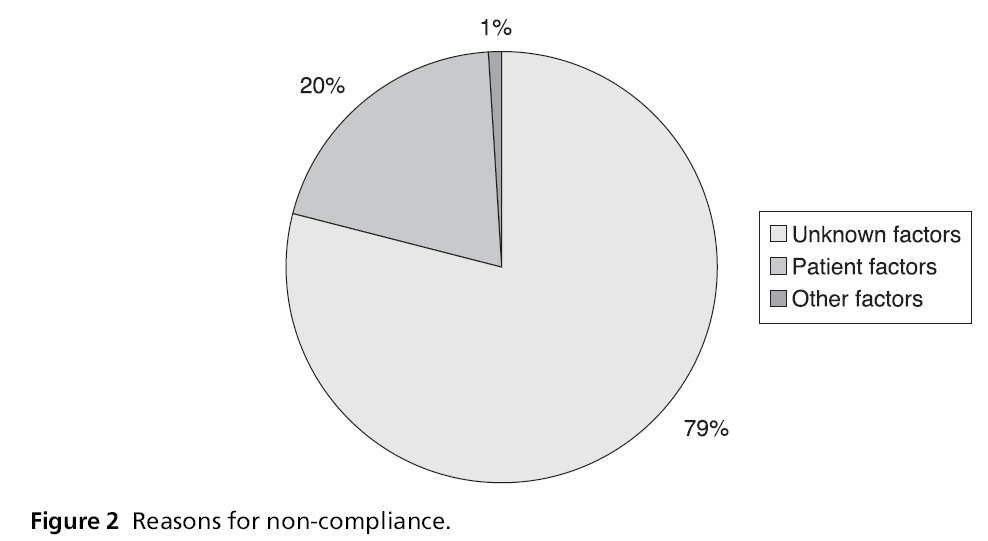 The overall compliance rate for CRC screening in this internal medicine practice was 33%. This demonstrated significant room for improvement. The reasons for non-compliance for the most part were unknown (79%). A significant number of patients refused to be screened (20%). There was a slightly higher rate of compliance among males (37%) than females (28%). This was probably due to higher rate of refusal of screening methods by female patients (18%) when compared to males (8%). The reason for a higher rate of refusing screening among females is uncertain, but may be a reflection of differences in sensitivity or psychological perceptions between the two groups. There did not exist much of a difference in adherence based on the ethnicity, though the division of groups was unequal. A bigger sample size may help to better explain whether such a difference exists.

The strengths of this study included a reasonably large sample size, a homogenous group practice, clearly defined inclusion criteria, and identical reimbursement for services rendered. The major limitation of our study was generalisability of our findings. This was a limited audit of compliance among universitybased general internal medicine specialists engaged in a surburban practice. While we had no a priori basis for assuming that the physicians in this practice were unique in terms of education, practice patterns and orientation towards preventive medicine, we were unaware if they were representative of other groups in these characteristics. Similarly, we had no information that enabled us to determine if the patient population was representative of other suburban populations. Another limitation was the lack of information regarding reasons for poor compliance and for determining if the compliance rate was representative of other primary care practices. Although we could not determine whether our compliance rate was representative, it was clear that there is substantial room for improvement. It is yet to be determined if poor compliance reflects a problemwith information, systems, behaviours, or combinations of these. A majority of non-adherent patients were due to ‘unknown reasons’, suggesting a deficiency in documentation, i.e. literally, no records were kept to determine why the patients were non-adherent.

Our study demonstrated poor compliance with CRC screening guidelines in a primary care practice. The reasons for poor compliance in this particular practice and patient population are unclear, but the implications seem evident: a sizeable proportion of eligible patients are not benefiting from the recommended screening methods. Since primary care physicians serve as gatekeepers for many patients, it may be beneficial to measure compliance rates in various practices and, if our results are confirmed, design effective intervention strategies.

The study was approved by the institutional review board (IRB) and was conducted in line with nationally accepted ethical guidance.