Could community pharmacies offer an opportunity to improve outcomes for patients with bowel cancer?

Background Lower bowel symptoms are common. A significant number of patients seek to treat their symptoms by purchasing over the counter medication. AimTo test the deployment of a self-administered questionnaire as an aid to advising patients with lower bowel symptoms. MethodsPatients attending 21 community pharmacies were invited to complete the Patient Consultation Questionnaire (PCQ) before purchasing a medicinal product to treat their symptoms. Patients were invited to participate if they were: 1) presenting with lower bowel symptoms (rectal bleeding, constipation and/or diarrhoea); 2) 18 years of age or older; 3) able to provide informed consent; 4) not pregnant and had not been pregnant for the last three months. The PCQ was scored by a researcher and the results relayed to the patient and their general practitioner (GP) within a week. Patients were telephoned four weeks later to ascertain if they had consulted a medical practitioner. ResultsNinety-one patients were recruited. Most were female. As anticipated, the majority of patients presenting to pharmacies are at low risk of pathology compared to the population of patients referred by UK GPs for specialist investigations. Only eight patients were recommended to consult their GP because their PCQ scores suggested an appreciable risk of colorectal pathology. Five consulted a GP. ConclusionsThe scope to intervene in the pharmacy setting to promote intervention for significant bowel disease is suggested by the significant number of patients who would be advised to consult a GP using this intervention. These data support the case for a formal trial to test the value of the PCQ to signpost symptomatic patients to appropriate health care.

Bowel symptoms including diarrhoea, constipation and rectal bleeding are common. This was illustrated in a study of an apparently well Australian population in the 1980s. Eight percent reported annoying abdominal pain that had lasted for two weeks or more in the preceding six months, while 19% reported a feeling of incomplete evacuation at least once every two weeks. Blood on the toilet paper was reported by 14% and blood in the toilet bowl by 2%.[1] As far as we are aware the study has not been recently repeated and we have no reason to believe that the situation would be different now. Bain et al published interview data more recently in which some patients with bowel symptoms tried to manage their own symptoms rather than consult a doctor, even when symptoms were persistent and later shown to be due to a life limiting condition.[2] These data are supported by the findings of a survey from GPs’ waiting rooms in which patients did not recognise most presentations of cancer based on persistent diarrhoea and/or rectal bleeding.[3]

One source of advice or treatment for diarrhoea or rectal bleeding is the local community pharmacist. Published data suggest that one in 15 patients identify the pharmacist as a source of advice about lower bowel symptoms.[3] We estimate that about three patients per pharmacy present every week in Western Australia seeking symptomatic treatment for bowel symptoms.[4]

The patient consultation questionnaire (PCQ), a self-administered tool for patients with bowel symptoms, has been shown to be a reliable and valid assessment of patient symptoms.[5,6] In the past this tool has been administered to patients referred to specialists from general practice. Patients are scored on the basis of their responses to questions about their bowel symptoms and family history. It has been established that patients with a score above 50 on the PCQ are at significant risk of colorectal pathologies with a 1:19 risk ratio for cancer.

Twenty-one pharmacies were recruited from metropolitan Perth. Consecutive patients seeking advice for lower bowel symptoms or asking to purchase medicinal products normally used to treat diarrhoea, constipation or haemorrhoids were invited to participate, on the basis of the inclusion and exclusion criteria below.

Patientswere invited to participate in the study if they:

• were able to provide informed consent

• were not pregnant and had not been pregnant for the previous three months.

• Patients who had consulted a general practitioner in the previous two weeks and/or were attending the pharmacy to purchase the product on medical advice.

• Patients who purchased the product as a precaution prior to travelling abroad.

• Patients who were purchasing the product for someone else.

The patients were recruited and consented by the pharmacist before completing the self-administered PCQ. The completed survey was then scored by a researcher using software provided by the designers of the PCQ. In 10% of cases the data were also entered by a second researcher to ensure that data entry was consistent. There were no differences in the scores from the twoinvestigators. The patientswere contacted a week later by the researcher advising them of their PCQ scores. In cases where the score was over 50, the patient also received a letter by registered post advising them to make an appointment with their general practitioner for further advice. A score over 50 was selected as it was anticipated that few patients would have high scores and the aim of this study was to explore whether the tool could be deployed in this setting. At the same time the GP received a letter informing them of the patient’s PCQ score, explaining the increased risk of colorectal pathology in these circumstances and that the patient had been asked to make an appointment with their GP. The patient was then contacted four weeks later to ascertain if they had consulted a GP about their bowel symptoms following their visit to the pharmacy. Those who were not contactable after three attempts were deemed lost to follow-up. Data collection for this pilot study ceased when the resources available for the study were exhausted at six months.

Ninety-one patients were recruited. The age of the patients and their PCQ scores are shown in Table 1; 31 were male and 61 female. The proportion of patients with a PCQ score of 50 or above who were seen in the pharmacy was 8.7% (95% CI 3.76 to 16.02%) compared to 49.9% of 1422 patients referred to specialists by GPs (see Figure 1). Please note the numbers of patients referred by GPs was collected over one year. These data were reported by Rai et al and have been divided by 20 in Figure 1 to demonstrate a comparison with the smaller numbers observed in this study.[6] 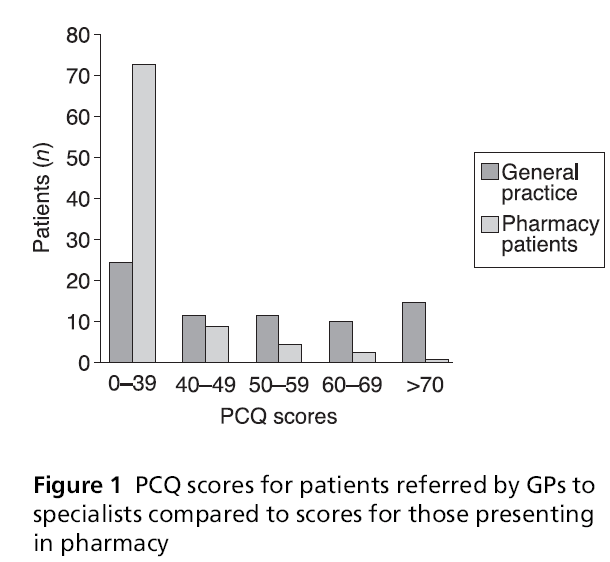 Figure 1: PCQ scores for patients referred by GPs to specialists compared to scores for those presenting in pharmacy

As anticipated, the majority of patients presenting to pharmacies had low PCQ scores. This is consistent with the profile of a population in a developed country that seeks over-the-counter symptomatic treatment.7 However, the scope to intervene in the pharmacy setting and to promote early intervention for significant bowel disease was also suggested by the relatively large proportion of patients (8.7%) with PCQ scores over 50. Extrapolated across Australia, which has 4992 community pharmacies, this implies that if three eligible patients are presenting to each pharmacy every week, then 14 976 such patients could be seen at pharmacies per week.[4,8] This is equivalent to 0.07% of the total population, i.e. a much smaller proportion of the population than was reported to have lower bowel symptoms in Australia.[9] Those who presented to pharmacies with PCQ scores over 50 had a significant risk of pathology, and most such patients will consult their GP if urged to do so.[4]

It has been established that most patients survive five years or more if diagnosed at the earliest stages of colorectal cancer.10 Currently, the major strategy to improve the outcome for colorectal cancer is a national bowel screening programme. Screening seeks to identify patients with asymptomatic bowel disease. However, the screening programme in Australia is limited to patients aged exactly 50, 55 and 65 years.[11] Patients outside these age limits are not formally offered a screening test, and yet a significant number of cancers occur outside this range. Therefore there is a need to maintain a high index of suspicion for cancer and other chronic and life limiting pathologies among patients who present with rectal bleeding and persistent or unexplained changes in bowel habit. Data published on colorectal cancers suggests that there is no ‘typical’ clinical presentation that characterises all treatable cancers and that such cancers can also be symptomatic. Therefore all symptomatic patients must be assumed to have treatable lesions until proven otherwise.[12] Patients depend on advice from theirmedical practitioner or pharmacist about themost appropriate management of their symptoms. Neither pharmacists nor GPs have been shown to reliably recognise all presentations of significant colorectal pathology.[13,14] Therefore innovations to assist healthcare practitioners to advise patients may assist in improving outcomes for patients.

Patients who choose to buy anti-diarrhoeal drugs or rectal creams in Western Australia must speak with a pharmacy assistant or a pharmacist before being able to purchase these items.[15] This affords an important opportunity to administer the PCQ and to identify patients who should be encouraged to consult amedical practitioner. We acknowledge that these are preliminary data and that we are not able to confirm the diagnosis for each patient. However, modest numbers of patients were advised to consult a doctor, and a small number consulted a doctor despite the relatively low risk of pathology suggested by their PCQ score. These data support the case for a formal trial to test the value of the PCQ to signpost symptomatic patients to appropriate health care. Pharmacists have an established role in supporting healthcare delivery in Australia. They offer an important focus for innovations to intervene early in chronic and life-threatening conditions.