This article draws from the behavioral economic research in Kang and Ikeda (2015) to review the evidence that human health-related behaviors differ according to the properties of people's time preferences in intertemporal decisions. We elicited time preferences through an Internet survey conducted on Japanese adults that involved four hypothetical intertemporal monetary choice tasks under several choice conditions as well as a time-inconsistent delay during an onerous school assignment. The results show that the respondents’ unhealthful behaviors were more salient for those with higher degrees of (i) impatience, (ii) present-biasness (whereby they discounted distant future felicity more steeply than that of the immediate future), and (iii) naivety (i.e., self-unawareness of presentbiasness). These results imply that intervening to alter naifs’ behavior (e.g., through “nudging’) is a more effective health policy than providing commitment devices and that taxing unhealthy products is effective in

Health-related behaviors are considered consequences of intertemporal tradeoff decisions in which health outcomes occur over time. For example, people make health decisions by considering immediate and future pleasure or the consequences of their health decisions and future health status. The degree of impatience is a key determinant of health-related decision making. In intertemporal tradeoffs, patient people tend to abstain from unhealthy behavior that will damage their future health, while the impatient are likely to behave unhealthily and sacrifice their future health; they therefore place more value on present pleasure by discounting future felicity.

In economics, the degree of impatience is characterized as discount rates, which express the subjective rate of the depression of future health values. Many traditional economists (e.g., Samuelson, 1937) have regarded discount rate levels as uniform regardless of choice condition.[1,2] However, recent studies in behavioral economics have found that people tend to apply higher discount rates to immediate future choices than to distant future ones (e.g., Ainslie, 1992, 2001; Thaler, 1981).[3-5] As discount rates will increase as the time point of the execution of future behavior becomes nearer, people with declining impatience—particularly naifs, who are unaware of their own condition—are likely to reverse their behavior more impatiently.

Our research using Japanese datasets reveals empirical associations between these time-discounting properties (i.e., degrees of impatience and declining impatience) and body shape (Ikeda et al., 2010), smoking (Kang and Ikeda, 2014), borrowing (Ikeda and Kang, 2015), and several health attributes (Kang and Ikeda, 2015).[6-8] This short article briefly reviews the connections between time discounting and several healthrelated attributes based on the recent evidence offered in Kang and Ikeda (2015).[7] We also provide insights into intervention policies for addressing unhealthy behavior based on our evidence.

A discount factor, the multiplier applied when people evaluate the present values of future felicity, is expressed as the exponential function of the delay τ when discount rates are invariant; the decline of discount rates through delay can be expressed as a hyperbolic function. The generalized hyperbolic discount function proposed by Loewenstein and Prelec (1992) parametrically defines both types of time discounting with the two nonnegative parameters γ and α as follows:

where both hyperbolic and exponential functions are connected as

.[9] According to the definition by which discount rate ρ equals –ƒ'(τ) / ƒ (τ), it can be calculated as follows:

In equation (2), the discount rate is declining in delay τ, which represents the usual property of hyperbolic discounters; such individuals are less patient in immediate future choices than in distant ones (Ainslie, 2001; Benzion et al., 1989).[4,10] Here, parameter α indicates the degree of declining impatience. As α increases, the degree of declining impatience also rises. In particular, the relative discount rates ρ(τ1) / ρ(τ2) (=(1 + ατ2) / (1 + ατ1)) for the two distinct delays τ1 and τ2 (τ1 > τ2), which are below 1, depend solely on α (i.e., a larger α implies a smaller ρ(τ1) / ρ(τ2)), leading to a stronger present-biased preference.

When the discount function forms an exponential one (i.e., α = 0), the discount rate takes a constant value over time, as ρ(τ1) = ρ(τ2). Respondents with higher discount rates should be more likely to value the present day’s pleasure over a future one. Therefore, we propose the following:

On the other hand, self-awareness of the preference reversal curbs time-inconsistent behavior: sophisticated hyperbolic respondents who correctly anticipate their future impatience may forestall their undesirable present-biased behavior, unlike naive hyperbolic respondents, who misperceive themselves as time-consistent. Therefore, we also propose the following:

Hypothesis 2 (H2): Hyperbolic discounters are more likely to show an inclination toward ill health than are exponential discounters.

Hypothesis 3 (H3): This tendency is stronger for naive hyperbolic discounters than for sophisticated ones.

Present-biased preference and degree of impatience

To elicit the respondents’ time preferences, the JPTR imposes four types of hypothetical intertemporal monetary tradeoff tasks. Two tasks offer three sequentially posed binary choices concerning immediate future tradeoffs (the present day vs. one week later) and distant future ones (one year later vs. one year and one week later). In the first choice, respondents are asked to choose between receiving 1,000 JPY immediately (in one year) or 1,300 JPY one week later (in one year and one week). The second and third choices vary the delayed amounts according to the options previously selected.1a The responses for the two tasks determine respondents’ willingness to accept one week later X1 and X2 of a delay in immediate receipt and distant future receipt, respectively.

Then, the degree of declining impatience α in equation (1) is obtained from X1 and X2 by jointly solving

which are combined into a nonlinear equation of α,

In our sample, the mean of the estimated α takes a positive value of 0.018, which differs significantly from 0 (p < 0.00), implying that the average respondent is present-biased. Respondents with present-biased preferences (i.e., with a positive α) comprise 40.2% (N = 960) of the sample.

The other two tasks employ the multiple price list (MPL) for receiving and paying money, both consisting of nine intertemporal choices between constant immediate small amounts and various delayed amounts ranging from small to large.2a Respondents’ choices are expected to change from immediate to future options in the receipt task and from future to immediate options in the payment task. Two discount rates for payments and receipts, ρ (X3) and ρ (X4), are calculated from respondents’ willingness to accept delay in immediate receipt, X3, and delay in immediate payment, X4, identified through the changing points of the selected options. The sample means of the elicited ρ (X3) and ρ (X4) are, respectively, 8.8% and 1.0%.

In the four intertemporal tasks, the respondents’ degree of impatience ρ is also calculated by taking the standard average of the four discount rates; the two are calculated from equation (2), and the other two are ρ (X3) and ρ (X4).

The JPTR also asks two questions regarding planning for and behavior in the assignment during school vacation. Present biased respondents (α > 0) are identified as naifs if they tended to delay the execution of their plan for the assignment time inconsistently, while those who finished the assignment almost as planned are considered sophisticates. Naifs account for 60.0% (N = 576) of the 960 hyperbolic respondents who failed to plan their summer assignments.

To determine the health status of respondents, the JPTR assesses their smoking habits, height and weight, a 10-point scaled subjective health, and dentition status.3a From the responses, we construct six health-related indicator variables: SMOKING (coded 1 if respondents reported consuming more than 10 cigarettes per day);4a OBESITY (coded 1 if BMI ≥ 25); SEVERE OBESITY (coded 1 if BMI ≥ 30); UNDERWEIGHT (coded 1 if BMI < 18.5);5a HEALTH (coded 1 if the respondent selected a value equal to or greater than six); and HEALTHYTEETH (coded 1 for respondents with such good dentition that they have retained all their permanent teeth). Smokers account for 17.2% of all respondents, while the obese, severely obese, and underweight groups comprise 18.1%, 3.1%, and 11.5%, respectively. Almost three quarters (72.6%) of respondents rate their own health status at six points or higher on a 10-point scale, and respondents with healthy dentition comprise 65.2% of the total sample.

To examine inclination toward health-related behavior, the HEALTHRELATED health index is created as a standardized variable of a principal component extracted from the binary or OBESITY and the three ordered variables that take the number of responses to the health-related questions (i.e., smoking, subjective health status, and dental condition).6a

Table 1 compares the mean values of the health-related indicators among respondents stratified according to whether impatience ρ is higher than average. The results show that health-related attributes relate to the degree of impatience, as hypothesized in H1: in all cases, impatient respondents (ρ > mean) display stronger inclinations toward ill health than do patient ones; all these differences are significant and show the predicted signs. 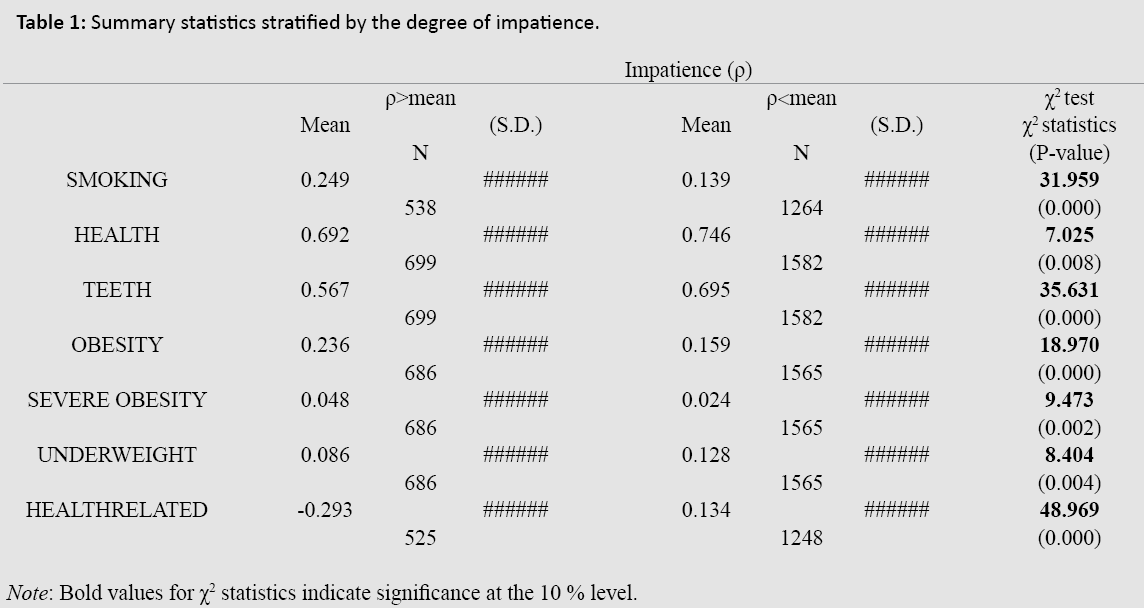 We also conduct probit estimations, in which impatience and naive hyperbolic discounting show significant marginal effects on health with the predicted signs, even after controlling other time-discounting properties and demographic and economic personal attributes, while sophisticated hyperbolic discounting tends to be insignificant.9a These results also support our hypotheses.[11-13]

We have shown the empirical associations between health attributes and the degree of impatience and declining impatience. We have also demonstrated that, among presentbiased respondents, naifs are more likely to behave unhealthily than are sophisticates.

This idiosyncrasy of health behavior among timediscounting properties, especially naive hyperbolic discounting, carries significant implications for political interventions against unhealthy behavior. First, our evidence gives important insights into the controversial policy of taxing unhealthy products (e.g., fat taxes, sugar tax, and cigarette tax). These taxes are valid, as they prevent or restrain the undesirable time-inconsistent overconsumption of unhealthy products among the naive, regardless of the level of their discount rate.

Second, providing commitment devices is not always effective in improving human welfare. While they may lead sophisticates to restrain their own time-inconsistent unhealthy behavior and achieve welfare improvements, they may fail to prevent unhealthy behavior among naifs, as naive hyperbolic discounters may not recognize the devices to reduce their long-term health damage. Thus, more direct interventions to alter their behavior, including “nudging,” could be effective. For example, naifs could be nudged to avoid eating unhealthy products (e.g., through a “smarter lunch room” project);10a also, advertisements designed to tempt people to consume unhealthy food could be restricted, and education to correct impulsive behavior could be offered.

1a See Figure 1 in Kang and Ikeda (2015) for the varying amounts in the three tradeoffs.

3a Respondents chose a smoking habit from seven options: (i) Never smoke, (ii) Hardly smoke, (iii) Smoke sometimes, (iv) About 10 cigarettes per day, (v) About a pack per day, (vi) More than two packs per day, and (vii) I used to smoke but have quit. They chose a dental condition from four options: (i) All permanent teeth (including treated teeth), (ii) Some missing teeth, but replaced by dental implant or partial denture, (iii) More than one missing tooth, without any dental treatment, and (iv) Wearing a full set of dentures. The options for subjective health indicate better health as the option values increase.

4a In the SMOKING indicator, 500 respondents who quit smoking (i.e., who chose option [vii]) are excluded because it is hard to predict how time preferences are related to quitting behavior.

5a The criteria on bodily habitus based on the BMI were provided by the Examination Committee of the Criteria for “Obesity Disease” in Japan (2002), which is affiliated with the Japan Society for the Study of Obesity.

6a To measure tendencies toward healthy status consistently, the binary indicator OBESITY and the six-point ordered variable for smoking are reconstructed such that greater values imply better health.

9a See Tables 5 and 6 in Kang and Ikeda (2015) for more detailed results of probit estimations.