Background The risk of cardiovascular disease in patients with hypertension is determined not only by the level of blood pressure but also by the presence of target organ damage and other risk factors. Numerous guidelines for management of hypertension emphasise the importance of using stratification for total cardiovascular risk in clinical decision making.Aim We investigated if primary care physicians consider individual cardiovascular risk, in addition to blood pressure level, when they select a treatment strategy. Secondarily, we evaluated physicians’ performance  in clinical management and pharmacologicaltreatment of hypertension, to determine predictors of control and intensity of treatment.Methods Acro ss-sectional study was conducted in an academic health maintenance organisation (HMO). Asample of 1200 records of patients with hypertension was examined to evaluate potential predictors of poorly controlled hypertension (160– 95mmHg) as well as predictors of change in the systolic and diastolic blood pressure (SBP and DBP respectively). Stages and groups risk stratificationwas used as reported by the Sixth Report of the Joint National Committee on Prevention, Detection, Evaluation and Treatment of High Blood Pressure (JNC VI).Results Atotal of 922 hypertensive patients were included. Patient mean ( standard deviation (SD)) age was 59.5 (15.6) years, 56.8% women, and average follow-up was 42.86 (22.7) months, with 3.42 (4.7) visits per year. The percentage of patients with well-controlled hypertension (

The problem of uncontrolled hypertension

Hypertension is a key public health problem and one of the most common reasons for a medical appointment and drugs prescription. In addition to ethnicity and age, the prevalence of hypertension varies by country and geographic area. In sample surveys in the 1990s, the age- and sex-adjusted prevalence was 28% and 44% in North America (United States and Canada) and Europe (Germany, Finland, Sweden, England, Spain and Italy), respectively.[1] According to different sources, between 25% and 30% of the population in Argentina is affected by hypertension.[2,3]

Despite of the availability of a wide range of medications, and increasing awareness of the dramatic impact of blood pressure (BP) treatment on reduction of cardiovascular morbidity and mortality, hypertension is still an under-controlled condition.[4–8]

The goals for management of hypertension are well defined, effective therapies are widely available, and practice guidelines for hypertension have been disseminated extensively. Even with such advances, hypertension control rates are still low.[9] NHANES III (National Health and Nutrition Examination Survey) estimated that control of hypertensionwas achieved in 25% of non-Hispanic black and white individuals, and only 14% of Mexican-Americans.1 The main causes of inadequate blood pressure control are poor lifestyle prescriptions, insufficient drug doses or inadequate drug combinations. The intensity of treatment is directly related to control rates. Although most patients require two or more drugs to achieve their goals, very often, hypertensive patients are undertreated. This phenomenon has been described as clinical inertia: failure of healthcare providers to initiate or intensify therapy when it is indicated.[10]

The cardiovascular risk approach and its influence in hypertension treatment goals

The relationship between blood pressure and risk of cardiovascular disease events is continuous and independent of other risk factors. The higher the blood pressure the greater the risk, even in the normotensive range. However, association with other risk factors or target organ damage is crucial in the management of hypertensive patients and an important driver to define the goals of the therapy. Although the Seventh Report of the Joint National Committee on Prevention, Detection, Evaluation and Treatment of High Blood Pressure (JNC VII) no longer considers an absolute risk approach in addition to the level of blood pressure to guide treatment compared to its previous version, theWorld Health Organization (WHO) guideline, and the European guideline, still emphasise the importance of absolute risk approach in clinical decision making.[11,12] Numerous methods have been described to calculate a patient’s absolute cardiovascular risk.[13,14] Group risk stratification allows physicians to establish priorities, adjusting goals and intensity of treatments according to the absolute risk of individual patients.

In the present study we evaluated the quality of management of hypertensive patients followed in a primary care centre network in Buenos Aires, Argentina.

Our primary research question was to investigate if physicians considered individual cardiovascular risk, in addition to blood pressure level, when they selected a treatment strategy.

Secondarily, we evaluated physicians’ performance in clinical management and pharmacological treatment of hypertension to determine predictors of control and intensity of treatment.

The study took place in a University-affiliated health maintenance organisation (HMO), based on the Hospital Italiano, a major teaching hospital in Buenos Aires, Argentina. The HMO provides health care for 120 000 people from the metropolitan area of Buenos Aires through a network of primary care centres.

Selection and description of participants

Acro ss-sectional study was conducted using medical chart reviews. Two sources of data were used to identify hypertensive patients who received medical care at the primary care centres: a prescription drug database of antihypertensive drugs and a database of ICPC (International Classification of Primary Care) diagnostic codes. The Institutional Review Board of Hospital Italiano approved the study. Diagnoses of hypertension were made according to JNC VI (two or more readings 140/90 mmHg, one reading 180/ 110 mmHg, or target organ damage) and severity (stage) of hypertension defined according to this classification, with the only exception being stage 1 that was considered >140/90 mmHg because of rounding or digit preference (stage 1 (mild hypertension): 141–159/91–99 mmHg; stage 2 (moderate hypertension) 160–179/100–109 mmHg; stage 3 (severe hypertension) 180/110 mmHg or above).

From 14 000 patients who met the inclusion criteria, we randomly selected 1200 patients whose medical records were carefully reviewed. From them, 922 (76.8%) patients were included.

One-hundred and twenty-two (10.2%)were excluded due to using antihypertensive drugs for another condition or having secondary hypertension, and 156 (13.0%) had not undertaken the two visits required after diagnosis.

Stages and risk groups were classified according to JNC VI.15

Control rates of hypertension, reduction of SBP and DBP in mmHg, and intensity of treatment were analysed separately and stratified by stages and risk groups to assess a physician’s consideration of risk stratification to guide their treatment strategy. To assess physicians’ treatment regimen selection, we evaluated the drug choice according to recommended guidelines.[9,15]

Means and standard deviations were used for normally distributed, continuous data, to describe the relevant demographic and clinical characteristics of the participants. For categorical or dichotomous variables, proportions were reported and chi square or Fisher’s exact test was performed for group comparisons. Multiple logistic regression models were developed to explore predictors of BP control and intensity of treatment. All the analyses were performed with STATA.

Characteristics of the population

The study population included 922 hypertensive patients. Characteristics of the population are reported in Table 1. According to the JNC VI definition, 870 patients (94.4%) had adequate diagnosis of hypertension. Of all participants, 283 (30.9%) had target organ damage or disease.

Controlled hypertension according to stages and risk groups

Blood pressure reduction according to stages and risk groups

Intensity of treatment according to stages and risk groups 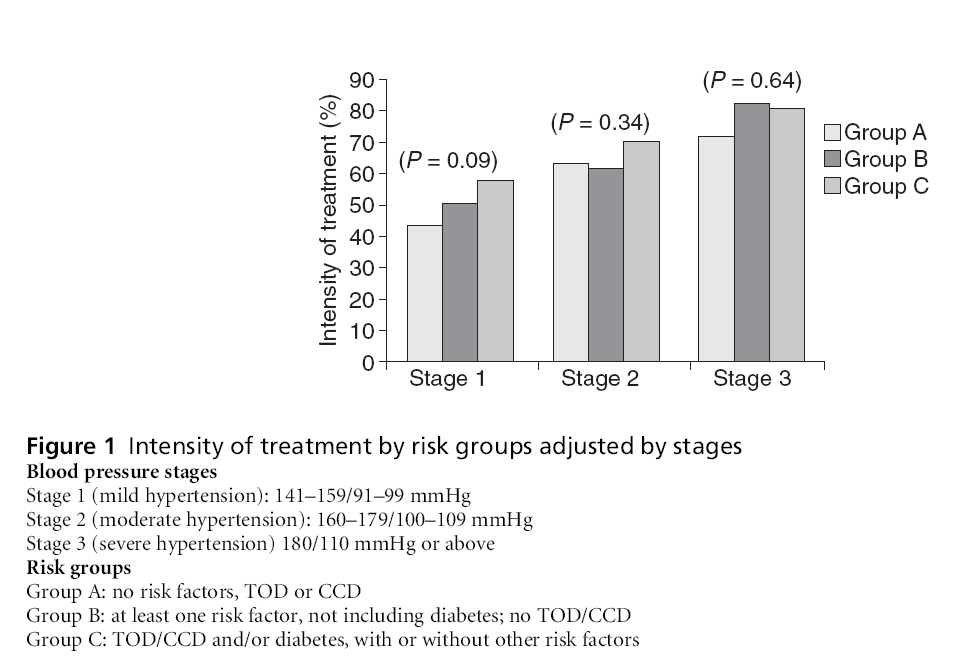 Figure 1: Intensity of treatment by risk groups adjusted by stages

Only 28% of the hypertensive population was treated with lifestyle modifications. Selection of treatment is described in Figure 2.

Predictors of control and intensity of treatment

In the multivariate analysis, the initial stage was the only predictor of control. The lower the initial stage, the higher the control rate. Risk group stratification, time of follow-up, number of physician visits, intensity of treatment, sex and age did not predict control rates.

Table 2: Predictors of control and intensity of treatment

In our study, BP control rates, and SBP and DBP reduction, were strongly related only to the level of blood pressure. Physicians showed no consideration of individual cardiovascular risk (cardiovascular disease, diabetes mellitus or other target organ damage) in making therapeutic decisions.More intensive treatment was only found in those patients with a higher level of initial blood pressure. However, less than 50% of hypertensive patients received two or more drugs.

The fact that cardiovascular risk was not associated with intensity of treatment emphasises that physicians were not considering an overall risk stratification approach when deciding a more aggressive approach to clinical management of hypertension.

Our population was similar to the Framingham population with regard to stage and risk stratification. [16] Blood pressure control rate was 53.5%, where the higher the stage, the poorer was the BP control. This figure is better than previous findings (21%) reported by Limansky et al.[17]

Berlowitz et al evaluated predictors of intensity of treatment in a population of 800 hypertensive men in five Veterans Administration (VA) hospitals of New England over a two-year period.[18] They arrived at similar findings: BP was poorly controlled (46.3%), patients with hypertension were not being treated aggressively enough and physicians failed to increase the dose of antihypertensive medications or to try new treatments. Their results indicate that physicians should more readily examine their approach to individual patients and identify situations in which more aggressive management may be appropriate.

In relation to drug choice, agents recommended by international guidelines were also the first-line drugs used; however, thiazides were prescribed less frequently than expected.[9,15,19] Only 43% of hypertensive patients in our study received two drugs or more. This constituted an indirect marker of clinical inertia because according to JNC VII most patients require two drugs or more to attain BP control.

This study was a retrospective analysis based on clinical records review, which might have led to bias due to insufficient and/or incorrect documentation.

Digit preference, rounding blood pressure measurement to the nearest 10 mmHg, is a very common phenomenon and was another limitation of the study. Because of the possibility of errors in measurement we decided to slightly modify the threshold for control to leq140/90 mmHg instead of the <140/90 mmHg recommended by the JNC VI. These modifications might have influenced the assessment of control of hypertension and limited comparisonwith other studies.

The main limitation of this study was selection bias, since the study focused on patients with better followup whowere more likely to be compliant with therapy. The participants in this study had medical insurance, a regular source of primary care, at least one year of follow-up after diagnosis, and at least two visits to the general practitioner. This scenario is likely to be better than the situation of the wider hypertensive population in Argentina.

According to the JNC VII, the ultimate public health goal of antihypertensive therapy is the reduction of cardiovascular and renal morbidity and mortality. High blood pressure is only one of many risk factors for atherosclerosis. Therefore, the process of care for hypertension in clinical practice should rest on careful consideration of the absolute cardiovascular risk.

Physicians could examine their approach to individual patients and identify situations in which more aggressive management maybe appropriate, considering not only the level of BP but also the overall risk stratification. These changes in process of care will improve the effectiveness of their interventions.

Although BP was reduced as a consequence of more intensive treatment according to the initial stage, it appears that physicians are not considering the patient’s global cardiovascular risk profile when making decisions about the management of hypertension. Despite the limitations, our study suggests that many patients with hypertension are not being treated effectively according to current recommendations.

Additional research is needed to evaluate its reasons and determinants to improve the quality of care of the hypertensive population.

The authors would like to thank Valeria Finkelsztein, MD, Martı´n Boccardo MD and Diego Terceiro MD for help with data collection. Special thanks to Karin Kopitovski MD.